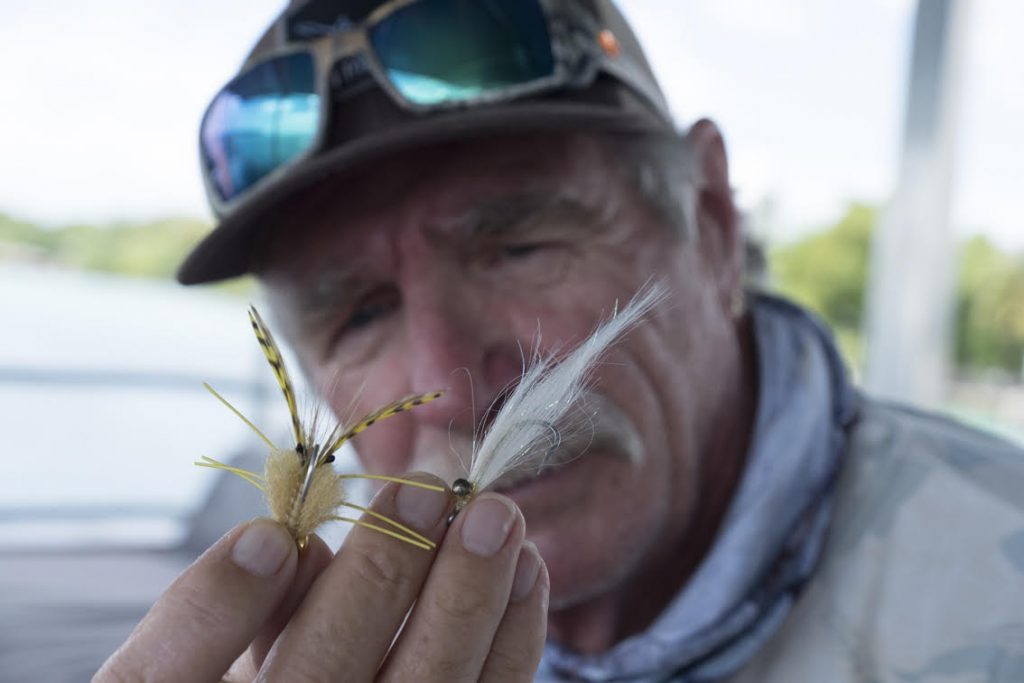 “In Weipa, without doubt the white Clouser. It imitates a lot of the baitfish in the area and I suppose we’d use that fly 90% of the time. Just about anything you can catch in Weipa you’ll catch on a white Clouser. A 1/0 is about the right size, sometimes a 2/0. I reckon we’ve caught over 60 species on a white Clouser”.

“I prefer them tied from synthetics because it’s so tough. Many of the fish we catch destroy bucktail Clousers very quickly and you’ll spend a lot of time tying on new flies when you should be fishing. I really like the DNA material for my Clousers.”

“I’ll often use them with no flash too, especially along the beaches. Sometimes they aren’t all white, I like them with a topping on them, olive or tan or brown which all imitate the baitfish in the area. In 20 years the best fish I’ve seen caught on a 1/0 white Clouser was an estimated 50lb cobia”.

I asked Fish what he likes to chase in his spare time.

“On a personal level my favourite fish in this part of the world is the permit and I tend to fish for them whenever I get the opportunity”.

“I prefer a Jono Makim crab fly for them. We do tie on other crab flies as well, and sometimes shrimp flies. Jono’s fly is fundamentally a Merkin pattern tied on a 1/0 hook and its easy to cast which is very important because where we do most of our permit fishing its windy, permit season here is usually windy. It’s weighted with 2 small dumbbell eyes. Being small its easy to use and that I think is its greatest attribute, its no harder to use than a 1/0 Clouser for example. Provided you have reasonable casting skills it’s not difficult to get it in front of a fish regardless of wind direction and strength and that’s very important. If you’re seeing the fish a long way out it means you can make those longer casts and not have to wait for the fish to get in closer where the chance of spooking them becomes so much higher”.

“I’ll use a variety of retrieves from do nothing to a long slow strip, and which one I use is determined by what the fish is doing, you need to read what they’re doing”.