Chris is one of those guys who delves around a question before answering and I wanted an instinctive answer from him rather than one that was given too much thought, the phrasing of the question was very important. “I want to know what that first fly you tie on is, that instinctive fly that you reach for first on most days”? 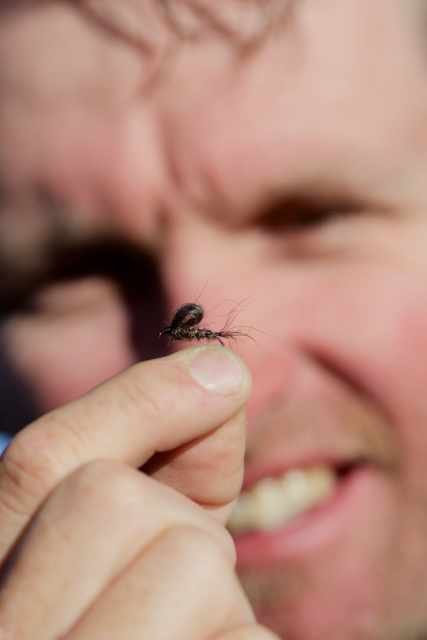 “Funnily enough I was talking about this just today with my clients and if I had just one fly to use to feed my family it would be a black woolly worm – but I never use it because its almost always never the best fly, but its such a great fly it always seems to work, so that would be my one fly”.

He thought about it some more. “It would be a Possum emerger, I actually tie on this fly more than any other over the course of a season because we chase mayfly feeders so much, and the mayflies start at the end of September and can finish in April, so as I’m chasing mayfly feeders as often as I can, from a boat on the lakes, with the clients, the possum emerger is my best fly over the course of a season, without a doubt”.

For me this selection actually came from left field, because when Chris isn’t guiding he’s an intensely competitive, focused, and analytical competition fisherman, who’s also the current Australian champion and is exposed to some great patterns and new ideas from around the world.

Chris’s version of this fly is slightly different to the original but he still calls it by its original name, something he considers to be very important.

“Do you fish its as a single fly or in a team”?

“What position in the team”?

He responded with a laugh, “Always, on the point, but the team usually consists entirely of possum emergers. But to mix it up I might introduce some colour and size variations of the same fly”.

“I first came across this fly in 1995 and it was shown to me by a friend at university. He was using a similarly profiled fly made from claret seals fur and deer hair and then changed over to the possum version and was catching a lot of fish on it in Arthurs Lake. It didn’t become a favourite of mine until the early 2000’s when I realized how effective it was on midging fish, even when there were lots of other food items in the wind-lanes, beetles, midges, mayflies, and terrestrials. In a mayfly hatch I fish it right through the hatch, early and late”. 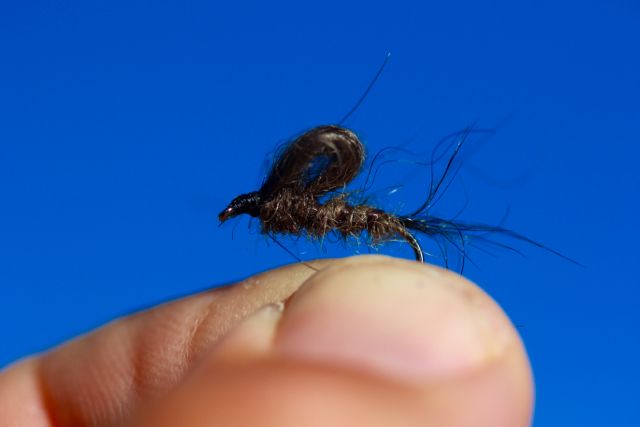 “It’s a tough fly that floats well, its very durable and if it sinks you can give it one false cast and its floating high again. It’s also fairly easy to see which is important for me, but particularly for my clients, and it’s easy to tie. I can fish it static and you can strip it across the surface and they’ll still eat it, it can sink and they’ll still eat it. It’s a brilliant fly. Of course there’s also an endless source of material on the Tasmanian roadsides, great to see it put to some use”.  Chris was referring to the inordinate road kill numbers of brush tailed possums in Tasmania.