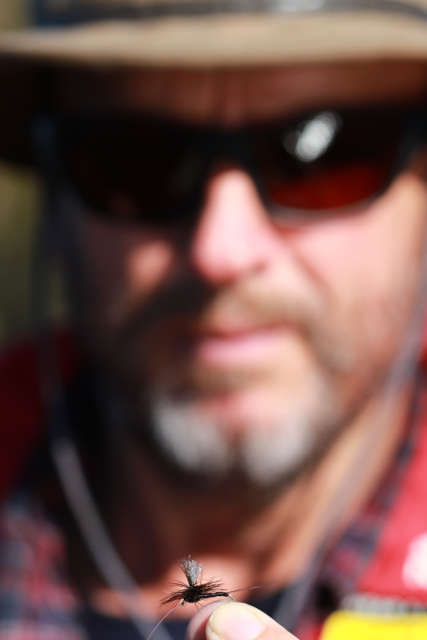 Rob mostly fishes a very specific situation in the Tasmanian Highlands. Between the magazine, a long project of restoring an antique house, and building a new one around the old one, vineyards, wine making, and grandkids, he (and Libby) have busy lives. Consequently Rob selects his fishing windows carefully, and to suit his quite specific preferences. He mostly fishes his home waters from a boat chasing difficult wind lane feeders, usually rainbows, and only casting to specific rising fish as they work their way around slicks and in concentrations of food.

“I first came across this particular fly when fishing with Brett Wolf on Arthurs Lake. Brett used it extensively and I’ve adopted it ever since. Bruce Gibson refined the pattern and my flies of this pattern were tied by Bruce.”

“I find it easy to see with its bivisible wing and feel that a parachute hackle is the way to go with most dries”.

“Parachute flies invariable land the right way up but also sit low in the water. Black spinners are present throughout most of the summer in the Highlands on most waters, so the fish are seeing them most of the time and they’re clearly a favoured food. But for me it also represents a whole range of insects, not just spinners, that are often present in wind lanes”.

In our fishing chatter Rob had mentioned, “feeding the fish”, something you’ll hear a lot of from tarpon, permit, and bone fishermen.

“I’m not just putting this fly out there hoping something will swim along and eat it. I really only use it in sight fishing situations where I have the fish lined up, I’m watching the fish, so I’m putting the fly right on track and the fish has to almost decide not to eat it, it can’t avoid making a decision. I call it feeding the fish and that’s how I use it. The fish can be feeding on a lot of different things but they’ll generally accept that fly if you get it to them in the right place”.

“These rainbows in particular are moving fast up a slick and it’s challenging to get that fly right in their path quickly”.

“Bruce Gibson from the North West coast of Tassy ties the flies I currently use and he’s been my supplier for a number of years. Unfortunately he isn’t tying commercially anymore and I only have a precious small stock left and I recycle them constantly, some are getting a little knocked around. I may need to tie my own soon. Other versions I’ve seen use too stiff a hackle with too many wraps. I like them quite sparse. Although it sits low in the water the wing remains quite visible”.

“I have fished this fly all over the Highlands and on the rivers as well, it seems to work just about anywhere unless there’s a specific hatch. Mind you my most memorable fish on it was a 6lb rainbow that I killed and it had 832 beetles in its gut (yes I counted them), but it still ate this fly. If its an each way bet kind of day it will be the first fly I start with and is usually the fly I finish with as well”.

Rob carries them in size 12 and 14 and varies the size he uses according to the conditions and the time of day.