The Klingon is a fly of my own “invention”. It was originally tied to represent a pretty standard belly flap teaser with a pink rubber squid pulled down over it. This is the preferred tease for most fly fishing for sailfish. This fly made its debut at the Broome sailfish comp in 1996 and Danny O’Sullivan named it. Its a now a very popular sailfish fly world wide. My preferred tie is as a tube fly. This allows you to use the most appropriate hooks and hook arrangement and it also means you don’t have valuable flies rusting away between trips.

This tube holder is made from a length of 2.2mm brass rod bent at 90 degrees and which sit in the jaw slot of my Dyna King vice. 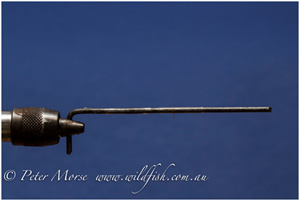 The tubes I use are from an acupuncturist, they are on every needle and they usually throw them away. They usually give them to you. 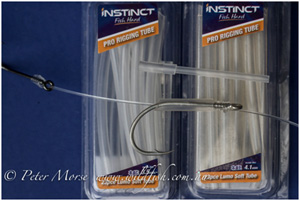 The silicon tubing I use for rigging comes from Tackleworld and is under the Instinct brand.

You may need to pad out the brass rod with some sticky tape to hold the tubing firmly on the tube. It won’t take much and should only be just enough to stop the tube spinning on the rod. I like to begin the binding on the silicon tubing. 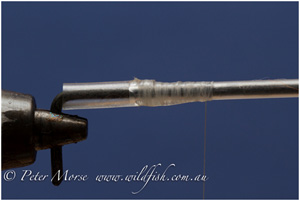 Tie in a generous clump of white super hair and plenty of pearl flash. 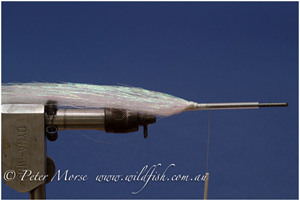 Advance the thread approx 1cm forward then tie in 8 X 6” saddle hackles over the super hair, tie these around the fly. The Klingon does not require grade #1 saddles, any shitty old saddles will do provided they have some length to them. Leave most of the marabou on them as well. 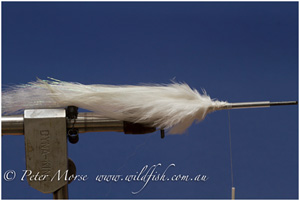 Advance the thread 1cm then tie in a veil of superhair over the saddles right around the fly. 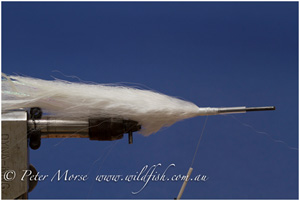 Advance the thread then tie in a 8 medium saddle hackles around the fly then a veil of pink superhair with some pink Krystal flash. 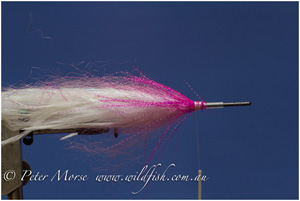 Tie in a collar of approximately 10 pink hackles around the fly and finish. 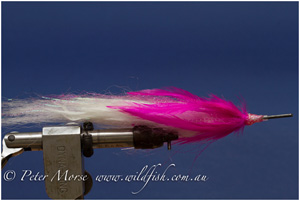